The American Trapper, A Forgotten Heritage 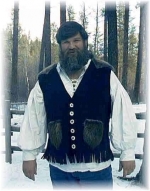 Starting from the monopoly of the Hudson Bay Company to today's trappers, Rowdy Ballard will share the history of the American trapper as well as their customs and traditions.

You won't want to miss this presentation from a real American trapper!

Rowdy was born in the Appalachian mountains of New York and moved throughout the United States. The majority of his formative years were spent in Wyoming, Nebraska, South Dakota, and Montana. Raised and experienced in the lifestyle of the fur trade and reenactment of the early nineteenth century Mountain Men and Native American customs and cultures, he spent three years in West Germany serving in the U.S. Army as a computer operator for nuclear missiles. With a passion for all things artistic, he prefers recreating pieces from the eighteenth and nineteenth century, pertaining to the everyday life on the western frontier. Rowdy has been an ordained Pastor since 1988. He and his wife have been married thirty-four years and have moved forty-three times, following their ministry to broken people and struggling churches. His lifetime goal perseveres in its simplicity of helping one more soul before he is called home.

* Bring your own means of seating for this event!

Registration for this event has now closed.