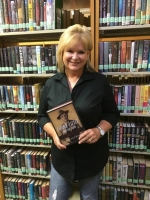 DSCL presents: Local Author Spotlight! On the first and third Tuesdays of each month, DSCL will spotlight a local author for an hour long book talk. This is a Zoom meeting - register to receive the link.

Award-winning author Jane (Janie) Little Botkin served as a public-school teacher for thirty years before turning to historical investigation and writing. As a high school teacher, she supervised the compilation of fifteen volumes of the student publication A History of Dripping Springs and Hays County (1993­–2008), a valuable resource for Texas researchers. In 2008 the Texas state legislature honored her career in education by formal resolution. Jane continues to contribute to local historic preservation in the Texas Hill Country and New Mexico’s White Mountain Wilderness.

A member of the Western Writers of America since 2017, Jane has judged entries for the WWA's prestigious Spur Award and reviewed new releases.

A double Spur-Award-winner herself, Jane's book Frank Little and the IWW : The Blood That Stained an American Family has also won, the Caroline Bancroft History Prize from the Western History and Genealogy Department of the Denver Public Library, the Best Historical Nonfiction Award from the Texas Association of Authors, and was a finalist for the Oklahoma Book Award, High Plains Book Award, and Foreword Reviews. The subject of the book is Botkin’s great-granduncle, a member of the Industrial Workers of the World, who was lynched for his words on August 1, 1917.

Jane has just completed a biography of Denver labor organizer Jane Street to be released by the University of Oklahoma Press March 2021. She is currently researching for her third book on Wyoming lawman Hank Boedeker, a friend of Butch Cassidy’s. Book jacket blurb from David D. Kirkpatrick, Pulitzer Prize winning journalist of the NY Times:
"Jane Little Botkin has unearthed an extraordinary story that reveals a hidden world. Her protagonist, Jane Street, was until now a mere footnote in the annals of American social history: a plucky young woman who appeared out of nowhere to organize an ahead-of-its-time labor union of domestic workers in early 20th century Denver. But Botkin has now brought Jane Street's whole saga to life in intimate detail--- her bohemian youth; her struggles in love and parenting; her battles with the elite matrons, the criminal underworld and the hardboiled men of the Industrial Workers of the World; her pursuit by the Federal Bureau of Investigation during the height of the Red Scare, and finally her unexpected later years as an amateur poet, a trained psychotherapist and a doting grandmother. It is an astonishing drama full of burlesque dancers, conmen, radicals, thugs, pimps, muckraking journalists and undercover agents. Botkin's exceptionally well-researched and very readable book adds a new chapter to the histories of the American women's movement, the American labor movement, and the American West, and it will be a great resource for future historians of the early 20th century."

Jane is currently writing a fourth book, The Pink Dress, Memoir of a GuyRex Girl, that delves into the early world of GuyRex, the famous beauty-queen makers, at the same time revealing the author's coming of age among controlling forces outside the pageant world.

Registration for this event has now closed.